Most game developers focus their interest on the Idea behind the Game. However, they take most of the time to implement the game mechanics and like so. But Monetizing the game is equally essential because making a potential game needs a lot of hours, lines of codes, logic, calculations, high-end graphics, strong math skills, art and animations, sound effects, engaging music,..etc which needs a lot of money to implement. So from the early stages of game development itself, the developer should focus interest on Game monetization also. In this article, I discuss HTML5 Games Monetization techniques, Details of Ad Network Providers .etc….

Running Ads on your host site: It’s best practice to launch html5 games on your own website. Drive the traffic through content writing and blogs. Run ads in your game through ad servers like

We can earn more revenue by implementing Ingame purchases like more coins, more points..etc… and Reward ads like dice throw of selected dice numbers like so.

Become an HTML5 Games Publisher: If you drive more traffic for your “HTML5 game website” and if you build a nice UI for games collection by adding filters, category listing, good navigation..etc.., you can also feature other publisher games on your site and get a “revenue share” from those games also. As a publisher of other developer games, you can get html5 games from sites like….

Distribute your game to different Gaming Channels(as a Game Developer):

Sell distribution Rights of your game:

sell exclusive rights of your game for a high price ( $1500–2000+ ) to one publisher/ sell non-exclusive rights for $500+, to multiple publishers. sell distribution rights to publishers, and take 60–80% from all ad/virtual goods revenue generated. Service Providers are….

As an HTML5 games Developer, I made this research. Hope it might useful for other indie game developers too. you can get updates of this article on my website article. Also get information regarding HTML5 Game development(Java script ,Code snippets),Game monetization strategies,game distribution, ..etc from Gameroost Blogs

Snakes and Ladders Online Game with friends and family

Play online Moksha Patam(snakes and ladders) on your phone, desktop, tablet, with whatever device you prefer from gameroost.com available in Telugu and English languages

Vaikuntapali, Moksha Patam,Parama Padam, snakes and chutes, snakes and ladders, Samp Sudi with whatever name we call it is a famous board game played all over the world. Vaikuntapali game is the Indian version of snakes and ladders. Most indoor games like Ludo, chess, carroms, Ashta Chamma, sholo guti, tiger vs goats, Beads Game ..etc have their origin in India. This shows our ancestors’ interest and passion for games and game designing, as we are playing those games till now and carrying them to our next generations also. Especially we have to talk about the Vaikuntapali(Mokshapatt) board game.

In ancient India Snakes and ladders was called MokshaPatam in North India, Vaikuntapali Game(ParamaPadam) in South India Created by Saint (saint) Gyandev in the 13th century. This game is designed to teach moral lessons vices and virtues to the kids along with recreation. Here the Ladders signify the virtues i.e., good deeds and Snakes signify the vices i.e., bad and evil deeds.

Have a walk-through of Mokshapatam(Vaikuntapali Game):

Vaikuntapali is one of the games which resembles our Hindu culture and history. It has 131 squares. It is a multiplayer game played by rolling the dice. Rolling 6 numbered dice allows the player to enter the game and move forward according to the number on the dice. The chance of rolling dice is given one after the other.

I call it a Life game, everyone should go through the ups(ladders) and downs(snakes) of the game(i.e.,life) and who first reaches “131 square” wins the game. 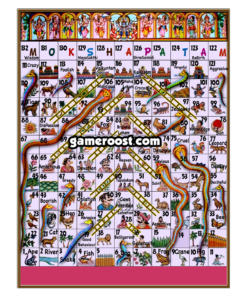 We see lot of images in this game like Animals,temples,birds,Hindu Idols,peoples,saints ..etc which is the best way teach kids the morals to be fallowed in Hindu Culture and traditions.

We also see in the game there are so many snakes and ladders. By clearly observing the up and down images of ladders and snakes we understand the main idea of the Vaikuntapali game. For example we see Bhakti(Devotion) and Brahma Lokam(i.e., through bhakti you reach Brahma Lokam),similarly Chittasuddi(Concentration) and Mahalokam(i.e., through Concentration  you become Mahanubhava), Yagnam and Swargam(i.e., through Yagnam you reach Swargam) at top and bottom of the ladders respectively. Similarly, for Snakes we see Karkotakudu and Pig(i.e.,Karkotaka is a demon , if you have this behavior you will born as pig in the next karma), Duryodhana and arrows,…etc at the head and tail of the snakes images.

We also see a big Snake called “Arukasura”(Who has malicious behaviour) which teaches us even if we reach high stages of life, by doing a single mistake we reach the starting point of the life game(reaches monkey again).Here I recommend Life changing Lessons for people to learn in their daily life  a wonderful article written by my friends Niyati Shah.

Likewise, if we explain we get a lot of moral lessons from the “Mokshapatam” game. It is the best game to teach our kids about Hindu culture and traditions and what to do and what not to do. what are the consequences we experience by doing good deeds and bad deeds?

With time, the game underwent a number of changes, Now it has 100 squares with no images and moral lessons, but the meaning remained the same: if you do good deeds, you go to heaven, and if you do bad deeds, you will be reborn.

You can play this Mokshapatam Game Online in your device @gameroost.com